We Changed the Weather!

My friend Kristi and I decided to go get pedicures on Grand Hog's Day.   Emma had a half day at school that day and when I picked her up, I discovered that it was not going to fly for me to be the only one in the house with painted toe nails.. We decided to celebrate the lack of shadow with pretty toe nails to bid spring on it's way.  Read Two Big Weather Changes Ahead to see that it worked!


"Here comes the sun do do do do"...
Thanks can be recorded in the comment section :) 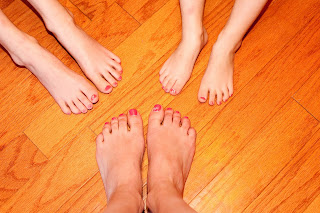 PS: It's a shocker but, two posts in one day (got to get em' in when Adam is at home to chase the kids)! Don't miss my Happy Birthday wish to my mom below.

PS:  Despite the frugality that I also inherited from you, I intend on investing in a non-generic box of Kleenex with aloe comfort for my nose before I write another sappy blog post.
Posted by Dana at 5:53 AM 7 comments: