Well, I guess you are a therMOMeter.

Big girls are still asleep. I went into the living room and heard a voice coming from underneath the sofa bed saying, "I've got ya where I want ya. Now I'm gonna eat ya".

Chloe: My play set has a swing and a Japanese bar or a Chinese bar. I can't remember.
Me: A trapeze bar?

Chloe: yeah, what country are Trapeze people from?

Chloe: Let's see, what do we have here today? Wynn: MY HEART IS BEATING!!! Chloe: OH NO! Well, we'll take care of that."

Emma: Did Adam and Eve have a belly button?

Chloe: Why is Pop-eye bald? Me: because he picked his nose and ate his boogers. That makes your hair fall out. Chloe: No it doesn't. My hair didn't fall out."

"Chloe: Mom, I want to be just like you when I grow up, except with different hair and different clothes."

"Conversation between Maggie and Chloe on the way to preschool. Maggie: "Clean and deck the halls with towels of holly". Chloe: "No, no that's not it. It goes, Jingle Bells Batman smells, Robin laid an egg.....". Adam Ellis, I blame you for our kid not wanting to "clean and deck the halls"!"

Chloe: "You're the best mother I've ever had". Guess I can't argue with that one.

"Adam and Emma are out getting us dinner and a cake. Chloe made Adam a birthday present and I put it in a bag for her. Then she asked, "How do you spell, you're the best daddy I ever dreamed of"?"

"So I was having a little nerf war with Chloe while Adam and Emma were at guitar practice. I accidentally popped Chloe right in the eye (which actually does hurt quite a bit). I ran up to Chloe saying, "are you okay"? Chloe said, "I'm not going to cry, I'm not going to cry. I'm tougher than Emma"."

"I walked into my room, Chloe is standing in the middle of my bed, looking in the mirror and she says, "No one said a girl couldn't be a musketeer" and then she started kicking and punching... what?"

"Chloe just woke up from a nap scared to death from having a bad dream. This is the dream as she reports it: She was a preschool and there were two giant, purple cats in the sky and they had thunder in their hands and they threw thunder at them."

"Chloe: I thought banks were stores where you buy suckers.."

"Adam to Chloe: Do you have any special skills or talents?Chloe: Well I am kind of good at milking a cow.."

"Chloe: Mom, I want to go to Paris right now. It's the most beautiful city. Me: That would be nice Chloe, I'd like to go to Paris too.Chloe: But I can't say the different Frenches.."

Chloe: (Appears in front of Adam wearing a dark green and brown plaid skirt and bright colored flowered shirt)Adam: Did your mom see you wearing that?Chloe: Yes, I showed it to the eyes in the back of her head and she didn't say anything so it must be okay."

Chloe: Mom, my best friend is Minnie Miney Moe and she was ran over by a car.

Chloe: yeah I wrote a song about it.

Oh and another one from Chloe today reported by her teacher Dani Jenison. A little boy kicked her at snack time. Chloe demanded an apology and then scolded him for talking with his mouth full

Chloe's supposed to be taking a nap but instead, she's in her bedroom singing and making up additional verses to the three little monkeys in the tree song. Apparently, the fourth verse has Emma in a tree....

Today from Chloe: When you were pregnant with me, I found a playground in your tummy. And I bounced way harder than I should have.

I was lying on my stomach on the bed. Chloe jumps up on the bed and does a belly flop right in the middle of my back while yelling, "GIRL STYLE". I am clearly creating mental patients here...

From my sister when she had the girls for a couple of days:

So... sitting at the dinner table we were informed that we were going to play a game where I was the mom and Donald was the dad. Chloe thoughtfully looked at him and said, "Well, I really like the dad that has hair. My REAL dad has hair ALLLLL over his head!

Chloe's prayer: Thank you God for momma, daddy, my sister, sparkles, butterflies, ladybugs, and almost spiders but no, not spiders...

Chloe: What does monkey start with? Me: monkey mmm mmm monkey M. Chloe: But I'm a monkey and I start with C 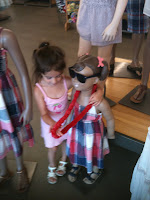 Hugging all the mannequins in Old Navy. Chloe calls them Americans. She runs in the store yelling "Americans, Americans!!! I have to hug the Americans"!!

4/19/2011  Spent 10 miles chanting,"you can hold it! You can hold it". Upon entering The Flying J, Chloe exclaims, "I didn't poo poo in my pants"!! Which resulted in applause from one very nice FJ customer.


4/25/2011 Chloe: Momma, flamingos are wonderful animals because they're all pink!


4/21/2011 Chloe: My sweet girl just brought me a big bunch of flowers that she picked and stuck them in the glass of water I was drinking... Then said, "I'm going to go pick you some more flowers, okay dude"?

12/18/2010
Chloe like for me to pick her up by the back of her pajamas and carry her in flying position.  She says I'm, "carrying her like a purse".  I did it a few times and then quit to fold the laundry.  She grabbed a candle of the coffee table and stomped toward her room and said, "fine I'm going to take this to my room and I'm going to cry real tears"..

12/10/2010
Chloe got in trouble for pulling a little boy's hair at preschool.  When I asked her why she did that she said, "he was going to pull mine but I'm quicker"..

Chloe when I asked her if she got in trouble at preschool: No but someone had to stick their nose in the corner. But not with glue

10/13/2010
Emma on the way home from church: Sometimes I ask myself. What if I'm the only real person and everyone else is robots?

Chloe: There's a girl at my school. They call her angel but she doesn't have any wings.

4/28/2009
Emma has a small birthmark on her side. The other day, she walked down the hallway toward me and looking down and her birthmark she said, "hey, my birthmark is the shape of the state of Florida".

Emma (age 5): Martin Luther King Jr. was the guy that thought the light skin kids that it was okay to play with the dark skin kids.

April 06, 2007
On Wed. we had an Easter egg hunt with the mom's club. I was hurrying around trying to get ready and get everything together to go. I decided to save time, that I would just blow dry the front of my hair and put the rest of it up in a clip. So Emma is sitting on the bed watching me and she says, "That's an interesting hair do you've got there". I said, "oh, you don't like my hair do?" And in very teenage, mom, you have no style kind of way, she says, "uh uh". So I found myself sounding just like my mother and said, "Well, I'm trying to get you to your easter egg hunt on time and I guess if you want to go, you are going to have to deal with the embarrassment of your mother looking like this. LOL oh dear.

April 1, 2007
I wanted to get down a couple of funny things that Emma has said lately before they get lost to history.

1) The other night, we had put Emma to bed and she was yelling things to us from her bedroom. Now, she knows that it would not be a smart move to get up from her bed so she does all that she can do to try to get us to come back in her bedroom once we've already put her down. Sometimes she has to go to the bathroom again (and this one you don't chance unless you want to change sheets in the middle of the night) sometimes she needs a drink of water and sometimes it's more creative than that. For instance, right now, as I write, she is yelling, "mom, my lips are chapped". Anyway, most of the time, we ignore it and it goes away. But the other night, she started yelling, "I don't like shadows". Now having gone through this before for we know that the only way to get rid of shadows is to make the room totally dark. That usually doesn't work either. I guess she couldn't think of anything new that night. So, we like usual were ignoring it. And then we heard, "ATTENTION EVERYONE I DON'T LIKE SHADOWS". Ok, I don't know if that sounds as funny as it seemed to us but Adam and I did quite a bit of rolling in the floor over that one. Adam did finally give in and go back in there (what a sucker) and she opted for having the lights out. Who would have known.

2) This morning, Emma and I skipped Sunday school and went to the main service only. She has a little bit of a cold and didn't sleep well last night and I thought I would be nice and try not to get anyone else sick. Especially since we might already be responsible for giving half of the church rotavirus. First, I will say that apparently, the punishment for missing Sunday school is having to go into church in the middle of a thunderstorm because just as we got there, the bottom dropped out. So, I looked around the car and was happy to see that we had a very tiny tinkerbell umbrella. So, I devised a plan. I would turn around and unbuckle Emma's carseat, she would crawl up front and then we would get out of the car together. I would carry her so that the little umbrella would cover the both of us (three of us actually)and all would be swell. This plan probably would have worked fine if she hadn't stopped to pick up the three barbie dolls that she had dropped on the way to the front seat leaving me standing outside of the car. Anyway, we finally got it all together and Emma said this.. "I'm afraid that the baby is going to be the only one of us that doesn't get wet today". I didn't get into the logistics of the fact that the baby is actually in a bag of amniotic fluid but it did make me laugh.