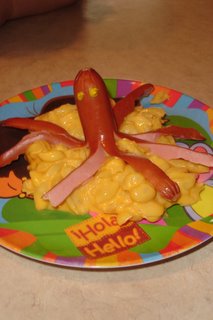 I thought I would share with all you moms a cute and easy kid's dish idea. I made it for Emma for lunch and she loved it. 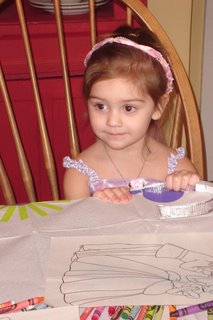 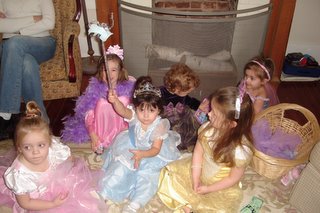 Looks like Emma may be taking after her daddy. At two and a half, she's already trying to figure this God stuff out. We had an ongoing converstation all day Sunday. It started during the contribution. We always give her money to put into the plate and we tell her that, "we are giving the money to Jesus". I guess it just makes sense that if we are giving money to Jesus, that he would be coming to pick it up. So, Emma says, "Is Jesus coming today"? I told her that he could possibly be coming today but probably not. Then she says, "Does Jesus have a car"? I told her that I didn't think so and that Jesus lived in heaven and when he came that he would come down out of the sky and then we'd all get to live in heaven with him. She then said, "I get to go to heaven"? I told her that everyone that believed and followed Jesus would be in heaven and that we'd be very happy there. All of this during the contribution mind you. On the way home from our nice lunch and visit with the Johnson's, we saw a rainbow. I pointed it out to her and we talked about how beautiful it was and I explained to her that God put the rainbow in the sky to show that he would never flood the earth again the way he did when Noah built the ark. On the way to church Sunday night she asked, "can I see the rainbow now"? I told her no, that it was gone now. She asked, "are there rainbows in heaven"?. I told her that I thought there would be many rainbows in heaven. And she said, "I think Jesus wrote on the sky". I guess that in a way she is right. Though I've never had the words to put it so beautifully simple. That will probably go down in history as one my all time favorites.

The picture is from a "princess birthday party" we went to on Saturday. It was lots of fun. Well, it's off to school for me.