I actually don't have a ton of pictures to post.. Adam has been out of town all week so I've been a little oh, frazzled maybe? Wow, I've got to find some single mothers in the area and give them a hand. They totally don't get the credit they deserve. And somewhere during the week, I stopped going crazy and finally got all the way there because I decided to end my already stressful week with a trip to Walmart... I loathe Walmart with a purple passion... When I get in there, I always want to scream: DO YOU PEOPLE SERIOUSLY THINK THAT THIS STORE WOULD BE HERE IF YOU WERE THE ONLY PERSON THAT EXISTED?! And there is room for two buggies to fit down one aisle. If, people would keep their buggy on one side and not in the middle of the aisle while they read the ingredients on the vitamins looking for the magic pill that is going to turn them into Jessica Alba.. Okay, so that was me looking for the pill that would turn me into Jessica Alba.. But at least my buggy was on my side.. And maybe all of us miracle vitamin shoppers should entertain the idea that maybe the thing that will make us thinner is MOVING!

So anyway, I haven't been to Walmart in about three months, because as you can see, I nearly lose my religion every time I go. But, I went today because we don't have any sort of craft store on our side of town and I had seen this nifty idea on one of those oh so talented mom bloggers page where she had turned placemats into throw pillows and I had just happened to have got a fabulous deal on some cute placemats but needed to find some stuffing for them... It looked so super easy and I was so excited about the opportunity to feel like I had some decorator's skills because the truth of it is.. The best I do is trying to keep my house clean. Not because I want A Soft Place to Land like the chic that runs that blog of whom I'm totally envious but, because I don't want to be landing because I tripped over something. So anyway, I went for some stuffing for my pillows that I was going to boost my domesticating ego with and, THEY HAVE GOTTEN RID OF THE CRAFT SECTION! So in light of that news, I say to my friends at Walmart, "Sam Walton would have been so disappointed in you'! And I am for real done with you now because unless you decide to pay me some big bucks to put your banner on my page, I NOW HAVE NO USE FOR YOU! Seriously, you would think that a company that big would do some marketing research to find that they were the only place to get craft supplies within 20 miles. You would also think they'd get on the bandwagon with having buggies that will hold more than one child. Even Lowe's has them! Did I mention that I LOATHE WALMART?

But, I did manage to grab my camera for a few shots this week. All though, I did skip getting pictures of my two girls with their mouths taped shut because I couldn't stand to hear them whine, "but daddy gives me a trick to help me go to sleep when he puts me to bed" one more time. You don't have to wrestle with whether or not you should turn me in for abuse.. I didn't really tape their mouths shut. But, only because I didn't have the idea until now.

But alas, here are the few pictures that I have gotten since I've been back from Alabama..

This first one was taken by Mark Grayson at our churches 4th of July festivities. And this was right before Emma and I lost our balance and my camera lens knocked against the picnic table causing it to snap in half. Thankfully, it wasn't my most expensive camera lens. But it is why all of the rest of the pictures you are going to see are over exposed. I am most partial to my 85mm but, it does such a good job of letting in light (a necessity for good indoor pictures) it isn't a good match for a super sunny day. Actually, taking pictures outside not in shade on a super sunny day isn't a good idea for any camera. But, sometimes, you just can't wait for the sun to go behind a cloud to make memories. 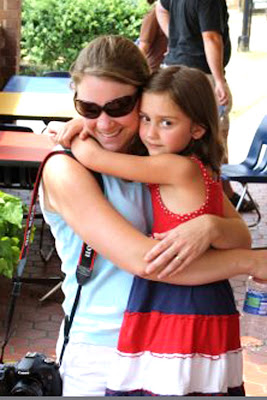 We got to spend some time with Maggie last week while her momma had an appointment. Here is Chloe serving Miss Maggie some tea. I'm not sure Maggie quite got why she was sitting out in the hot sun, parched, drinking something that wasn't actually there but Chloe enjoyed having her as her tea party guest. We did go inside to grab their sippy cups shortly after this picture was taken. 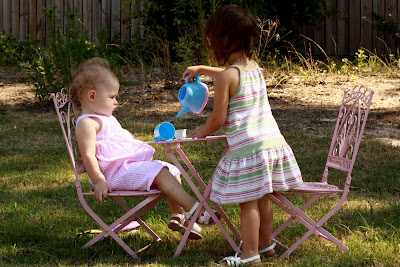 Here is Emma and her friend Avery and Chloe (who wouldn't take her eyes off of Strawberry Shortcake) meeting SS at the summer reading program that our library does. 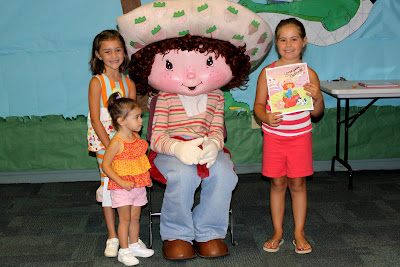 Avery and Emma making wands to go with their princess dresses. 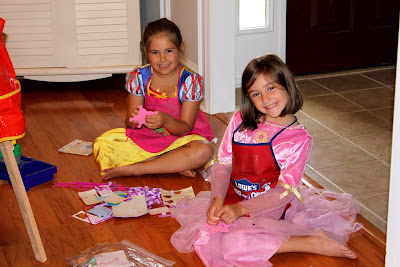 Okay, here is the part that I am most excited about showing you. Not only am I not much of a decorator, I am also not a gardener. However when my mother-in-law aka: Nana in our home, heard that I had wanted to try to grow some vegetables with the girls, she got me these grow boxes. Since Lynn shares in my gift of having a brown thumb (no, I am not getting myself in trouble. She has a brown thumb by her own admission and she is totally secure in her brown thumb as well as I), and she had gotten vegetables to grow that way, she just knew that I could too. So, we decided to start easy and plant cucumbers and carrots, two of the girls favorites. I didn't have much confidence that anything was going to amount from it. And I had thought we had been successful at growing some weeds but, I became suspicious that we might have a little more than weeds in the carrot box when the cucumber box was making nothing. So, I jumped on the internet and looked up "carrot leaves" and low and behold, I found that we were growing carrots! And for me, one out of two when it comes to gardening, is a huge success! 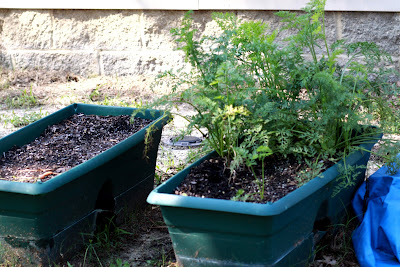 So the other night, I let Emma pick one and I couldn't believe my eyes but there was a full grown carrot there! I peeled the one carrot and cut it into small pieces to share with some friends we had over and they all declared that it was the best carrot that they had ever tasted. I told Emma that I wanted her to wait to pick the rest until I had my camera ready . So, this afternoon was harvesting time! Except for one carrot that she left to pick with her daddy. So sweet! 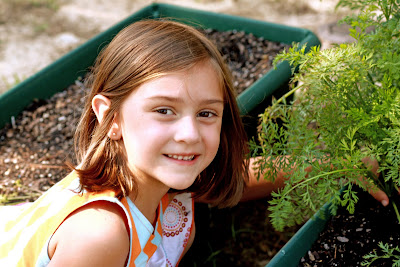 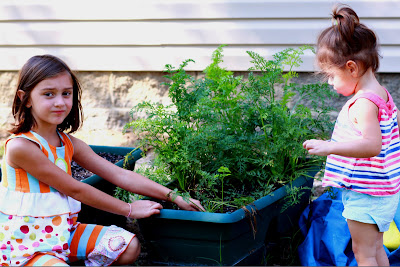 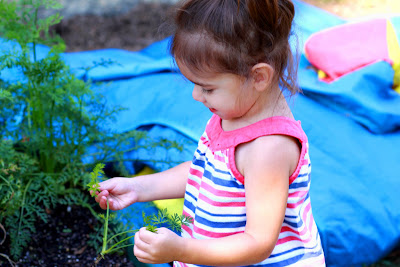 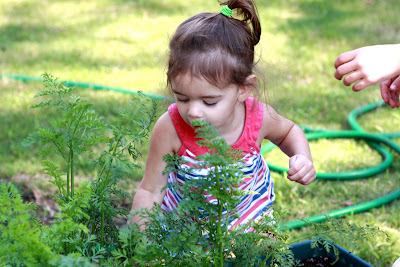 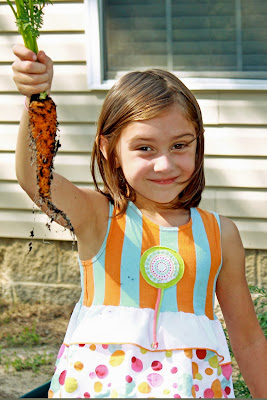 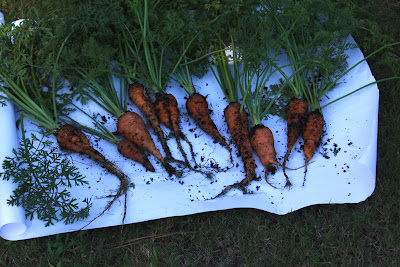 And I was about to get a domesticating ego boost because of the carrots and then I recalled something.. Chloe and I had planted the cucumbers, Adam and Emma planted the carrots.. Oh well. Someone else that can do it for me.. EVEN BETTER!!! And besides, they are in my backyard so I'm claiming them!

Adam did make it home safely around 1:30 a.m. He and Emma are watching Narnia since they just finished reading that book together and Chloe is taking a nap and I'm about to go outside and get some sun on my white body! I wish you a happy weekend with lots of family to love!