....as I was taking my screaming, kicking two year old out of church on Sunday. Actually there was a variety of looks. There was the one of sympathy from the mother who has finally gotten her child raised. There was the one from the grandmother that said, "oh, just let her throw Cheerios all over the church, it's so cute". There was the one of relief from the mom who was wondering last week if she was the only one. There was the look of deep thought from the newlywed as she tried to remember if she took her birth control yesterday. There was the look of fear for the mommy-to-be as she was questioning if she had made the biggest mistake of her life. And though I couldn't have possibly have seen this look, just in case there was someone there that took just a slight bit of joy over my misfortune, to you my friend I say, YOUR DAY IS COMING! .. 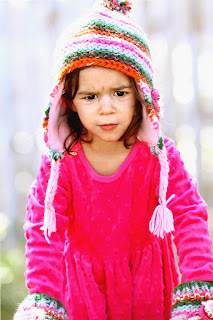 So the plan was to make Chloe sit on the bench out in the foyer because I certainly couldn't remove her for her behavior and let her play. But, as the screams began to escalate, I took her to the bathroom in an attempt to mask her screams from the congregation. I accessed the situation and soon decided that despite my efforts, we were being well heard. So, I opted for a trip to the car in which I wrestled her into her car seat while I was saying, "you have the right to express your feelings but if you don't do it in the right way, no one is going to listen to you" and then shut the door and stood outside until I heard the surrendering little sobs of "momma, I'm sorry" about ten minutes later.. She then returned to her angel little self (with big puffy eyes) and went on to Children's Church ..

The comments I got after were quite entertaining as well. Things like, "I'm impressed you didn't kill her". "Is shes cutting a molar"?. "You're kidding me, Emma acted like that too? She seems so sweet". "Is she not feeling well"? To which I replied, "no, she's just feeling two". Okay, so maybe this doesn't happen with every kid. But, just in case you are one of those moms that is lucky enough to experience the terrible twos with all of your children, I like what Dr. Greene says, " Ideal parenting does not prevent the "Terrible Twos" -- it helps children navigate them." And, I will also say that the struggle for independence pays off. For the most part, Emma is pretty well behaved though she still has her moments and she's fairly responsible for a six year old. She evens sets her own alarm clock and gets herself up for school. Some adults haven't even mastered that skill. So to you I say, persevere, this too shall pass and the rewards are splendid.

But, to make sure, I did go back and check to make sure that Emma did in fact experience these crazy fights for independence. And seriously, deja vu'.

I now give you, my very first blog post ever (almost exactly 4 years and 3 months ago when Emma was the exact same age).. The inspiration for this blog, because it's cheaper than therapy.

Ok, Emma has officially hit the terrible twos. In the past week my little angel’s body has been invaded. I think I will refer to it as her first adolescence. She is definitely wanting to state her independence. She’s not quite big enough to slam a door or roll her eyes but she can sure put out a mean scream. After two big battles today, both about going to bed, one for nap, and one for the night, she is quietly laying in her bed looking like my little angel again. All of the sudden, she wants to do everything by herself, get into everything she’s not supposed to, and really let me know about it if something doesn’t go her way. Today, she wrote on her dresser with a Sharpie marker (yeah, those Mr. Clean magic erasers aren’t quite as good as they say) To go anywhere, I have to allow an extra hour to get there because she wants to pick out her own clothes, put them on herself, put on her own shoes, turn out the lights, open the door, get in her car seat, shut the door, and buckle herself in the car seat, all by herself. None of these things she can actually do by herself so I have to wait until she actually tries it and sees that she can’t do it alone, and she surrenders to needing my help. And, we have done this repeatedly. Even after all of this, I still have this over whelming love for her and I know my life is so much more wonderful than it was before she was in it.


There are quite a few lessons I could take from this. One being humbleness, yes, I had heard other mothers talk about temper tantrums but since my little Emma had always pretty much pleasantly obeyed, I thought we were above that (man I knew better than that). But, what I’m really wondering is, how often do I seem like a two year old to God. Running around messing things up, trying to handle things myself and then whining to God when it doesn’t go my way. And what’s worse, I do these things over and over again. All the while, God is standing there patiently waiting for me to figure out that I need to surrender to him and give him the control. Then, he picks me up, pats me on the head and lets me rest in his love.

God thank you for showing me in such a wonderful way my need for you. Please help me to rely on you!

One thing is for sure, I’ll be resting in his love tonight. After wrestling with a two year old all day, I’m too tired to do anything else.