Since I still haven't posted all of my Christmas pictures, I'm going to quickly sum January up in one post. Frankly, I'd prefer to sleep through January and wake up sometime in February when the skies turn blue and the sun peaks through.   January is the month that usually makes me think that humans should be animals that hibernate..Having both mine and Adam's birthday's to celebrate wouldn't even be reason enough in my mind to pull me out of hibernation if I had my say..  When we lived in WV,  the skies turned gray in October and stayed that way until May.  Along with the blue skies seemed to go people's smiles and everyone seemed to fall into a long winter's funk.  January here this year has been way too similar to those never ending winters we had in WV and I'm longing for spring.. I think God knew that I might give up hope that spring would ever come and he blessed us with a beautiful 74 degree day yesterday.  We went down to a local park and we walked, and played and ate dinner outside and it was the most marvelous day... Today it's dank and dreary..  But hopefully yesterday's beautiful weather will hold me over for a few more weeks.. I have to admit that the cold has brought along some nice moments of snuggling.. But, I'm longing for days of playing barefoot in the backyard.
Adam and I share the same birthday and  we soothed each other's old egos and I secretly felt better because he's two years older... Since we do share the day, it is nice now that Emma is old enough that she insists that we have a birthday cake.. That way, we don't feel so silly buying our own cake.  My mom took the girls for a long weekend.  The trip was a day shorter because of the crazy ice that covered the path from here to there.  And the fact that mother nature stole a day of an opportunity to sleep in doesn't help her record in my book.. But we are thankful for the break and ever grateful to my mom for always being willing to adjust in whatever way she has to get them on weekends like that.  I have been told that my sister has some pictures from that weekend.  And we'll only hope that she does better at making those public than I have lately.    On the photography front, I've been doing virtually nothing.. I seem to go through spurts where I can't even stand the thought of carrying a camera around and I seem to be there now.  But, I've been doing a lot of graphic design and retouching work and I'm really excited about some marketing materials that I'm working on for my friend Jay at Click Photography and the new studio that she's opening.  Stay tuned on that one.. 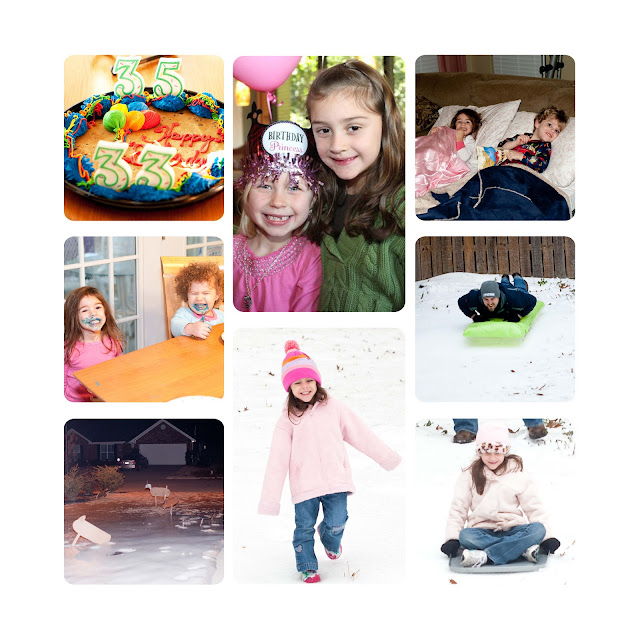 Okay, before I bore you to death with my monotonous January life, I'll  explain the pictures and be done with it..
Top Left yep, sigh 33 and 35..  Top Middle:  Emma and her sweet little friend MaKayla at MaKayla's birthday party.. Top Right.  Benjamin and Chloe.  Benjamin is my friend Nellie's little guy that has been battling a disease called Langerhaun Cell Histiocytosis for the past year.  We were ecstatic to get the news  that Benjamin's scans were clear last week!  Nellie went out of town for a couple of days early in January and Benjamin stayed with us.   Chloe seems to think that he should live with us now.  Left Middle Chloe and Maggie after they ate a piece of our birthday cake.  Smurfette, watch out, these two will take you down!  Maggie stayed with us a couple of days while her regular babysitter was out of town and they both had a ball. I laughed and laughed at them because they both play like boys.   Bottom Left is a birthday prank because people will just never let us fully leave youth ministry.. I thought they were calling us old goats or something but apparently there wasn't that much thought and they just thought it would be fun to cut deer out of cardboard and stick them in the snow in our yard.. I was so unexcited about going out in the snow/ice and I thought it improved the look of my front yard by giving me something to chuckle about when I looked out into the frigid cold that I left them there until I went to pick Emma up from school the next day..  I do what I can for the neighborhood.. And, the last three are us attempting to play in the snow.  That lasted all of five minutes before we decided that fun shouldn't be torturous and we all went inside and snuggled up in the bed because we are so OVER IT!!  If that ground hog sees a shadow Wed., I'm going to hunt him down and pull him out of his hole and pick him up by his heels and slap his head against the wall....