We decided to take a mini vacation during spring break. Six Flags has an awesome deal on season passes this year. Only 49.99. Since we had two recent vacation catastrophies and since Atlanta is about the mid point between us and my parents, my mom and dad and my sister and her family all got season passes hoping that it will prove to be a way to have a fun summer without costing us a fortune. So, we came down yesterday after church and went into the park for a few hours, spent the night, and went back in for the day today. It was a little cool but we bundled up and the longest wait we had was about 10 minutes. Mom and Dad and Denise and Donald came and we all had a blast. I didn't even bring my camera (purposefully) so we'll have to wait on Aunt Denise for pictures.

It's 11:16 p.m. At the moment, I am sitting in the hotel bed, which isn't all that comfortable but tolerable since I brought my own sheets (my weird thing about sheets has even more behind it when it comes to hotels. Don't want to be scarred for life? Don't watch dateline). When we wake Emma up in the morning, we always go in and say, "wakey wakey, eggs and bakey". Emma is sacked out on the other bed and Chloe is bouncing on the bed beside me saying, "wakey wakey". . I gave into to Chloe's desire to try Yoohoo and apparently, it has the same effect on her that it did on me as a child, something that seems similar to crack.. Note to self: Yoohoo for mom, hide yoohoo from Chloe..

So, while I'm waiting for her to crash from her sugar or chocolate high or whatever (what is in that stuff anyway?), I thought I'd note some things that they've both said lately. I found that when tried to relay them to my mother today I am already forgetting them so I thought I better get them while the getting is good.

Chloe--
She's starting to say things that let me know her wheels are turning..

The other day, I put her in her car seat, and buckled it. I went around and got in my seat and turned off the car and she said, "momma buckle". I would have buckled, I promise. But, she was sure to keep me straight. When Emma was about three, she started asking me if I had my Sam's card every time we got in the car. That should give you a little bit of an idea how many times we got to Sam's without my card.

She has also started frequently saying, "ah cha cha". I think she picked this up on the Mickey Mouse Clubhouse. I need to catch that one on video to do it justice.

The other night, I put her in her bed and she bounced across the bed and gave me several kisses. I then told her I love her (typical bedtime routine). She normally says, "I love you" back. So after about three times, I said, "Chloe can you tell me you love me"? Her reply.. "daddy do it".

Emma--
This one goes back quite a while but since my post on Disney World is still sitting half written in my drafts, I thought I'd go ahead and get this one down. While we were at Disney, some of our friends that live in the area, Tony and Susan and their two little ones came to visit us. By this point, Emma was deliriously tired and I had been thrown up on more times than I could count after rushing to DW after spending a sleepless night with Chloe in the hospital only to make it into the park at 4:00 p.m. on the first day. My tank of patience was empty and Emma was pushing newly discovered buttons. She often gets overly excited and when she does, we tell her to sit back and take five deep breaths. I gave her my normal, "Emma, I want you to sit back and take five deep breaths". It worked for all of two seconds and she was bouncing off the walls once more. So I said, "Emma, I want you to sit back and take five more very deep, very slow breaths". To which Emma said, "I took ten the first time".... Hey, at least she plans ahead.

We get to see them so seldom that we usually get to chatting and I forget to get a picture of us all when we do get together but I did grab my camera just in time to get this picture of Claire and Emma. They became buddies really quickly. They also have an adorable little boy that almost made me want to try for a third one. ALMOST.. I think I decided that we just have to find a way to see Tony and Susan more often. 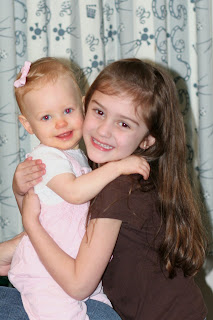 And this wasn't talking (which is a rarity for Emma) but today, we were very bundled up for our cold day. She was wearing both a jacket and coat. She took the coat off when we went in to eat lunch. Adam had informed her that she had pizza on her face. She started to wipe her face on her jacket sleeve but Adam stopped her just in time by saying, "Emma, don't wipe it on your jacket" in his common, "have you lost your mind" tone. She then picked up her coat and attempted to wipe her mouth on her coat. He handed her a napkin just in time and I was spared the heavy duty stain removal I would have had to do once we got home. And I immediately feared for my grandchildren who will very likely be raised by a politician which is perhaps, more dangerous than being raised by a preacher.