What's Going On With the Ellis Family

This is the first of three new posts so make sure you scroll down.

I was talking to some moms of teenagers at the teen Superbowl party the other night and they got me paranoid by telling me about how much they had forgotten. Well, I write tons of things down in this blog but there still are so many things that I don't record. Anyway, here are a few more things that I don't want to miss..

And yet another funny from Emma...
I've been trying out the recipes that you guys so graciously shared. Last night, I was cooking the Chicken Pot Pie that Rachel sent me the recipe for. I will share that recipe later since she e-mailed it to me. Anyway, Emma comes in the kitchen and asks me what I'm cooking to which I reply, "Chicken Pot Pie". To which Emma replies, "oooh grose". Now I must tell you at this point that I don't allow "ooh grose, yuck" or anything of the like comments about dinner until she has tried it. So I say, "Emma you haven't even tried it, you're going to try it and then you can decide whether you like it or not". To which Emma says, "Are you trying to scare me? Are you really making Chicken Pox Pie". I thought Adam and I were going to fall out in the floor.

Chloe... I swear she was teasing me last night. It has become obvious that she knows her name. We think that she might even identify me as momma, Adam as daddy and Emma as sissy. So we like to play this little game with her where we will say, "Where's momma" and she'll look at me or even reach towards me, "where's daddy" and so forth. Well last night, I was holding her and asking her, "where's momma". Well, she was totally ignoring me. And so I got a little louder and said, "CHLOE" to which she grinned real big and buried her head in my shoulder. I don't know, she was looking pretty proud of herself.

Now a little something that is going on with me... I have started donating milk to the National Milk Bank. We pray all the time that God will bless us so that we could be a blessing to others. So this was my thinking, "Well, we had a rough year last year financially, so there must be something else God has blessed me with that I can bless someone else with. I don't have a lot of money but hey, I have lots of milk". I had said lots of times that I wish I had donated when I was nursing Emma. Well, I decided that I would stop talking about it and actually do it. First, I checked the local milk banks. The closest one to me was in Columbus which is a good two and a half hours away and they don't do shipments. Since this wasn't really feasible, I checked with the National Milk Bank. Now, the NMB is a for profit organization so first, I had to check this organization out. I guess I needed to feel sure that someone wasn't getting rich off of selling my milk. This is what I found: They are for profit because there are very strict guidelines for being non profit. One of the things that they do is provide a breast pump. Being for profit enables to them to do that as well as afford the supplies to have the milk shipped. Patients that receive the milk still have to have a prescription and it is covered by insurance. So, my milk will go to premature and sick babies and this company also sends four shipments a year to orphans in Africa. Also, the process that pasteurizes the milk is pretty expensive. They take the milk and separate the fat so that the babies are given just the right amount for their age, weight and so forth. Then three different persons milk is combined together so that the babies are able to get immunities from three different people with each bottle that they are fed. I had to take a blood test that tested me for all kinds of infectious diseases (I'm disease free which is nice to know). I had to do a DNA test so they can match the milk up with me when they receive and when I have 25 bags frozen, they will send me a cooler and I will package it up and send it on it's way. I'm excited. I guess it's a way to thank God for the health of my children. So if you are interested and have any questions that I haven't answered here, feel free to ask away.

The girls and I are leaving to go to Alabama on Saturday. We will fly down and be there about a week and a half and then Adam will come and stay a few days and bring us back. Winterfest (a youth rally that the teens go to) is in the middle of that. Normally, my parents come to Gatlinburg to keep Emma but with nursing Chloe, it would be very difficult to do this year. I missed Emma's first year too. So, we're going to go hang out with the family and Lynn is going to come up and stay a couple of days with us. I can't wait!! I will also be there for my mom's birthday which is super cool. But, this means that Adam will be alone for Valentine's Day. Thanks Adam for being so cool about that. Good news is, when you get to Alabama, we'll have a babysitter and we can go on a date :)! I don't think we've had one of those in like three years.

I have one more set of pictures to post but I'll try to get those up in the next couple of days. 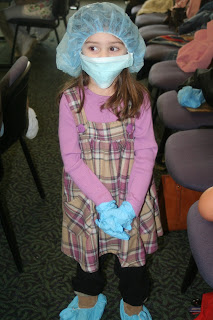 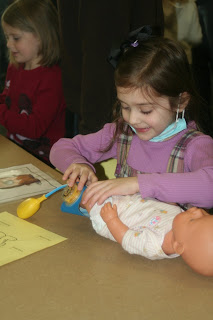 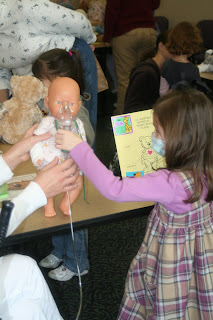 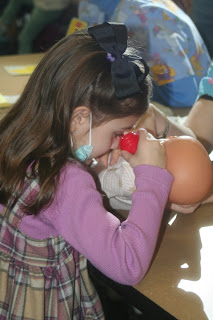 A couple of weeks ago, Emma's class did the best field trip ever. They got to take a teddy bear or doll to the hospital and they had little stations set up where they got to doctor their dolls. If you know Emma, you know that this was a dream come true for her. She had a blast.
Posted by Dana at 4:45 AM 3 comments: