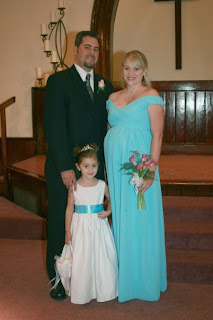 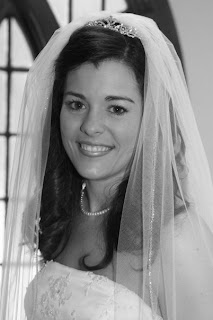 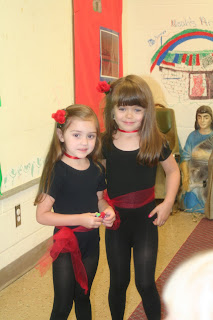 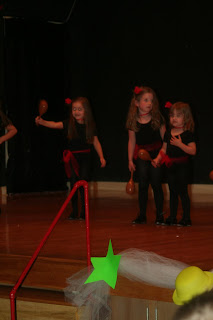 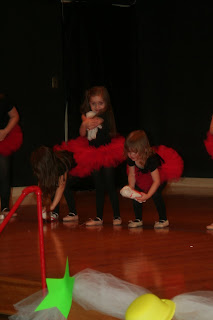 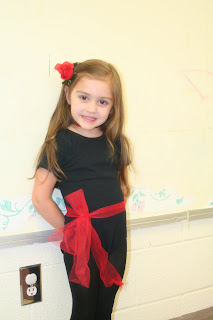 Emma's first dance recital was May 18th. And of course, I don't do anything easy so I've got a nice little story to go along with this one. The recital started at 6:30 and we were supposed to be there at 5:45. We arrived around 5:50 but I wasn't really worried because I knew it didn't start for quite a while. So anyway, I get there and am standing around just chatting with the other mom's when I looked down and realized that all the other little girls had on black tights and Emma did not. Now before I finish this little story, I would like to state my defense. When we were leaving dance practice on the Monday before the recital, Dolly i.e. dance teacher tells us that if they don't have any panties that won't show from under their leotards, to let them go without them. Now can someone tell me why the panties would be an issue if they were going to wear black tights? Well anyway, some how, I missed the black tight memo probably because I was in the bathroom because Chloe camps out on my bladder.

So, I determined that I couldn't let Emma be scarred for life because she was on stage without tights at her dance recital when she was almost four years old and so, my scavanger hunt begins... Now I should tell you that black tights aren't the easiest thing to find at the end of May. The children's consignment store doesn't have them, Kmart doesn't have them, Shoe Carnival doesn't have them but thank God for Sears!! So after running breathlessly into all of the stores listed above, I ran into Sears and found a wonderful display of tights singing to me like a voice from the heavens. I quickly but carefully examined the label on the tights to make sure I was getting the right size and then took off in a mad dash to the sales counter. I waited behind a very slow lady and then while I was quickly explaining my story to the sales clerk in hopes that she would hurry, I realized that something wasn't quite right. With confirmation from the very nice sales clerk, I determined that the tights were navy blue instead of black and began my sprint again. Just so you know, I did make it back in time ,by the grace of God, with black tights, and got my oblivious little angel in correct costume and saved her from a life time of nightmares about being on stage in front of crowd. Might I add that I had left her panties off and that we showed the whole dance class her cute little bottom so we probably traded that in for the nightmares of her being naked in front of a crowd...

Oh well, anyway, these are the things that I learned from this little experience:
1. Needing tights for your daughter's first dance recital does in fact merit using your hazard lights.
2. People do not think it's funny when you cut them off in traffic.
3. People do think it's funny to see a pregnant girl run.

Anyway, the recital was adorable. Emma particularly enjoyed the number where they tap danced with maracas. And as she went to town with that maraca, we laughed and held our breath hoping that she didn't knock out poor Katie who was standing beside her.
Posted by Dana at 8:25 PM 1 comment: