The Princesses and the Pea 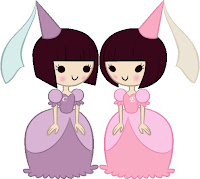 It is official boys and girls. The tests have been done and they have passed or either failed.. how ever you want to look at it. Both of my girls are real true princesses. This story will be a story that I will tell my grandkids about their mothers. It will definitely go down in history as one of my favorites.

On April the 10th, I went with Emma and her class to see the "Princess and the Pea" ballet. Now Emma's teacher doesn't half do anything.. So the whole week before the ballet, they did activities having to do with the story. Well, the night before the ballet. Emma brought home this: 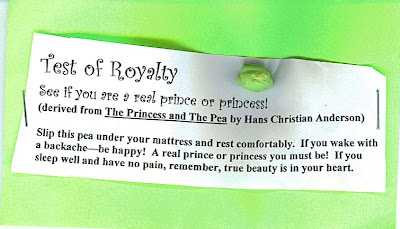 Emma is all about princesses but we typically don't encourage her to think she's a princess herself other than in a "you're a princess because your father is the King of Kings" kind of way but, I just couldn't resist the chance to play a little trickery on my little darling... Come on, you know that every parent takes some kind of sick joy out of deceiving their child. Why else would millions of parents spend their hard earned money on presents and then spend their hard to come by time wrapping those presents only to secretly put them out on Dec. 24th and give a man that doesn't even exist the credit for their hard work. Don't deny it, you love it too.

So anyway, this was our devious plan...
Adam took Emma to the bathroom to brush her teeth. Emma has an egg crate mattress on her bed so I slipped a golf ball under the egg crate. Adam brought her in and I said, "Now we're going to go ahead and test this out because if you are a real princess, I'm not going to have you laying on this thing all night and not well rested for the ballet tomorrow". So, I had her sit on the bed while she watched me place the pea under her mattress. She then laid back on the golf ball. I wish I had video taped this because the look on her face was priceless. I'm pretty sure that she was fully ready to fib and say that she did feel the pea. But there was a look of pure shock on her face when she actually did (or so she thought). So, I very carefully removed both the pea and the golf ball at the same time and we went on with our normal bed time activities and I thought that was the end of it. Until.... I was changing the sheet on Chloe's bed last night. So I lifted up her mattress and low and behold... You guessed it. There was our little pea. Now it just so happens that Chloe hasn't been sleeping real well due to her never ending teething. So, I decided to seize the opportunity to head of any problems in the future that might result from Emma thinking that she was a princess and Chloe not. So, I pulled my acting skills out once again and this is what I said, "Emma Elaine, look what I just found under Chloe's mattress. I've told you that she hasn't been sleeping well. How long has this been under mattress". Emma very sheepishly replied, "a long time, I forgot I put it in there". To which I said, "Well, don't you ever put a pea under you sister's mattress again. I haven't slept in days. If you ever do that again, you're going to be in big trouble". To which Emma said, "well, I guess now we know that Chloe is a princess too". I just can't stop laughing about the whole thing. Kids are the best!

Now I realize that this whole thing could definitely come back to bite me in the tail. I'm sure that at some point, one of them will probably try to use their royalty to get out of doing some chore. But, it will be at that point that they will learn that I've already passed my test as queen and that the princesses still have to obey the queen. (I hope).

May you sleep well tonight and wake without a backache tomorrow!!