What does your letter say? 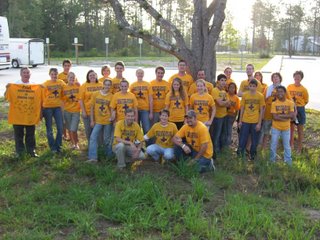 There are two new posts. If you haven't already, you might want to read the last post first.
St. Francis of Assisi said this, "Go into the world and preach the gospel, if necessary, use words". That has been our focus this summer. Teaching the teens to "be" the gospel to the world around them.

I'm going to be totally honest here. At the beginning of the summer, I was ready to tell Adam to quit and take a job at Walmart. Actually, I did say that. I have said something like that many times over the past eight years. I never wanted to marry a youth minister. The thought of living in a glass box and feeling responsible for other people's souls never appealed to me and as shallow as it seems, being poor never appealed to me either. First, I will say that God has taken care of us very well and that I am so glad that God knew what I needed more than I did. However, there have been many times that I have longed for a "normal" nine to five job in where my husband and my children's father would come home and we would have no where to go in the evenings and we would have him all to ourselves. Well, it so happened that a youth minister stole my heart. So anyway, even though I had it planned out in my mind that I was going to marry a doctor and live the easy life, I have always come back to this: I have always had a dream that somewhere somehow, I would see and particpate in a group of Christians that was the church that God intended us to be. In our trip to New Orleans, we did it.

I have never been more proud of a group of teenagers (and adults). We did more than just gut a couple of houses. Before we left, Adam talked about how we were a letter from Christ and how no matter what we did and said, the people that we came into contact with were going to formulate an idea of who Jesus is based on us. We also talked about how the Bible says that people will know us by our love for each other and that how we treated each other really effected how others see Him. All I can say is WOW, I have never seen any group of people so unified in their mission. I hesitate to mention any specific examples because there were so many and not one person slacked. However, their are a few things that I just can't slip by. Our bus driver Paul... Paul is a Christian, we knew Paul for a week. We love him. It reminds me of the love that the Paul in the Bible talks about. We love each other because we all love Jesus. Paul worked with us every day. Though I was already off the bus and didn't see it personally, I was so touched when I found out he cried when he left the group. And there were so many little things, like instead of having everyone pack their own lunch, a couple of the teens would pack everyones lunch for the next day. Or how Susan and Kathy washed everyone's shirts for them every night, or how someone went and found J.T. extra blankets because the building was FREEZING and he was really cold, or how instead of complaining about the outside M.A.S.H style showers everyone laughed and talked about how "fun" it was, or how we would be waiting in line somewhere and let other people go before us so they didn't have to wait behind such a large group, or how all the girls made it their mission at the trip to the mall to find a pair of capri pants for Nicole so that she would feel special on her birthday, or how when someone was asked to sweep, not only did they do it without complaining but they washed the windows too or how when someone walked up to sit with the group, the teens would make their circle wider to make sure everyone was included, or how a couple of the teens fixed us dinner one night. I could go on and on. We went to save a families home and we did! The city workers thanked us and told us that they knew it wouldn't be getting done if it wasn't for the church groups. What an awesome testimony for Christ!! Someone from FEMA came by and thanked us. But, the kingdom of God broke through in the little things. It was going the extra mile that showed the heart. No one stopped at doing just what they had to do but, did so much more.

I don't know where we'll go from here. But I do know this: you can't catch of glimpse of God's dream of how the church should be and not be changed. I would estimate that we have done 10 trips a year for 8 years. Out of approximately 80 trips, this was no doubt the best trip I've ever taken.

I am a letter from Christ. I think we all know now what our letter should look like. I think the question we should keep asking ourselves is, "What does my letter say"?

Please pray for our ministry!

Where have we been?

I started this blog for Emma, so that she can have a record of the life we lived before she was able to remember, I want her to know that she was born into a mission. Since, we are far away from our family, I want a way for them to know her and know our ministry. I know that many of you have been praying for us. Words seem a very inadequate way to describe how grateful I am for that. I'm about to tell you where those prayers have taken us. First, I want to tell you a few things about Emma.

On July the 28th. Adam and Emma and I loaded a charter bus headed for New Orleans LA for a mission trip with 22 other teens and adults. We left at 6 o'clock in the evening and around 4 o'clock in the morning, we dropped Emma off with my parents in Trussville Alabama. I will use this as an opportunity to tell you what wonderful parents I have. It is unbelievable that even with us living so far away, they have managed to be so active in our lives and so supportive of us. Anyway, Emma made it obvious to us how eager she was to get rid of Adam and me and have her grandparents all to herself by the way she repeatedly said, "bye mom and dad, bye mom and dad". Her being so excited about her visit made it much easier for me to leave her. This was the longest I have ever been away from her and I was quite proud of myself. I did very well. Though many times, I had a feeling like I had lost or was forgetting something, I did much better than the other trips we have taken where we have actually come back early because I couldn't stand being away from her. Every day, I would call and talk to her and hear from my mom or sister depending on who she was staying with at the moment the cute things she said. Here is my favorite: She was sitting at the bar at my parents house and she was kicking the bar. My mom told her to stop kicking the bar and she said, "I'm not kicking the bar Nonna, I'm playing the drums with my feet". Oh no, could that be a politician in the making? After my mom explained to her that she would play the drums on her bottom, she decided that playing the drums with her feet might not be the way to go.

Well, to sum it all up since I still have a whole other post to do that I presume will be pretty long, I couldn't wait to get back to her on Friday. We met my mom in Trussville for lunch and Adam was able to spend a few minutes with her. We were all very happy to be together again. I felt like she had grown a foot and that her hair and gotten much longer and she of course was wearing new clothes since she had made a shopping trip with my sister. We sent Adam and the rest of the group from GC on up to WV. She has been a little more clingy than usual since we've been back together and I have to admit to you that I'm kind of enjoying it. Monday evening, we started out for a visit to Adam's parents (which is where I am now). On the way here, we stopped for a visit with Aunt Jan and then saw Grandma when we got to Enterprise. Yesterday, we spent the whole day and I mean WHOLE day shopping. Emma will start preschool in the fall and she will definetly be the best dressed kid there thanks to Nana. We are enjoying ourselves but are really missing Adam and are excited about getting back to all the people in WV. Ok, now our to the next post for New Orleans.
Posted by Dana at 6:40 AM No comments: