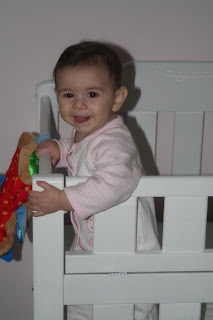 So for the first five months of her life, Chloe did not fight me on going to bed or taking naps or anything. I think it would have been easier if she had. Because somewhere, she developed a will and it's much harder for her to learn now than I think it would have been earlier. So I had put her down for her nap determined that I was going to be more stubborn than she. I could hear her crying and was trying to keep myself busy with washing the dishes because it's much easier if I have a task that I'm working on. Well, things got quiet so I went to peek in to make sure that she was asleep and this is what I saw. If you look closely, you can see that she had been crying. But, she was quite proud of herself at this point. And guess what, she won. I can't leave her in there now because the mattress needs to be lowered so that she won't tumble out. No worries, I have a pack-n- play and at the moment, she's safely placed inside and I'm writing this to the sound of her cry. I'm saved from the infant out smarting me for now. I'm not sure if all of this is early or not but it's way earlier than Emma did all of this. I just knew that Chloe would be late moving around because she's so laid back. She's still pretty laid back but she's got some of that strong spirit that is inevitably in her genes. I have no idea where that comes from ;). She's quieting down. Maybe I should go check and make sure she's not in there doing cartwheels. 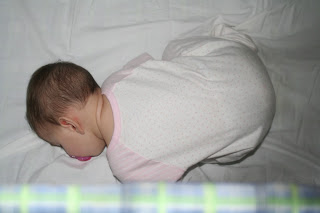 PS: make sure you scroll down and see the video of her saying Mama.
Posted by Dana at 9:23 AM 3 comments: