my dearest Emma that your heritage lies in Alabama. I'm so thankful that your daddy came along and rescued me from my redneck family. And also my dear, I must beg for your forgiveness for the way that I am about to sabotage your birthday. I just can't pass up the chance to expose the humiliation that these significant women in my life have caused. Especially when one of them just posted a picture of me on facebook. IN A BATHING SUIT... But dear Emma, just remember, it could be worse. Think about your sister... She was born in West Virginia.

Emma and my mom planned out Emma's birthday party over the phone months before we made our trip. Emma had very specific requests for a tea party. I am still in contact with several friends that are still in the area but every last one of them have boys. Wanting to keep all of their masculinity intact, we decided that my mother, sister, my Aunt Nancy, myself and Chloe would have to suffice as her tea party guests. My mother had a list of items that she was to obtain. I must make it known that I do not allow my daughter to give me orders nor did my mother, her daughter. But as you might know, grandmother's tend to throw every motherly instinct that they have out the window and let their grandmotherly instincts take over, therefore, making a 180 turn in the direction of spoiling the involved child ROTTEN. In an effort to keep up her reputation of being at Emma's every becken call, my mother made a list as Emma named off the items that were of upmost importance to make her tea party a success. Among other things, the list included: fans, gloves, crystal tea cups and plates, roses, and mixed flowers. My mother and Emma talked regularly during the weeks that led up to the charming event. Pretending to be sure that she hadn't forgotten a detail, Emma repeatedly asked my mother to read her the list. I'm pretty sure that it was actually her clever way of making sure that my mother really did write the items down and that she was making it a top priority to keep up with the list. But my mother, being true to her word, found every last item and the the birthday party was set in motion.

It started out fairly normal. Emma opened gifts and blew out the candles. We all sang the traditional birthday song and even skipped the banjo accompaniment. 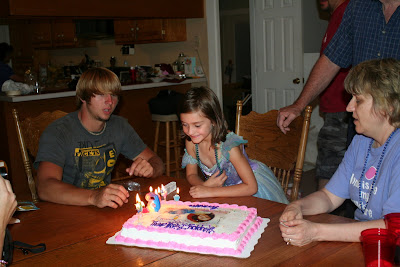 But, as fate would have it, trying to get my family to have a sort of sophisticated party could probably be equated to the difficulty of taking a monkey to the opera...

And here is where it all began to go off course.. My parents got a great price on an RV a couple of years ago. And Emma's favorite place to play at my mom's house is in the RV. It just made sense that with the RV being Emma's favorite, that we'd have the tea party in the RV. This story would maybe be what you would get if say, the movie "Sweet Home Alabama" and the movie "RV" had a baby... Did I mention that the reason my parents got a great price on the RV was because it was made in 1986? 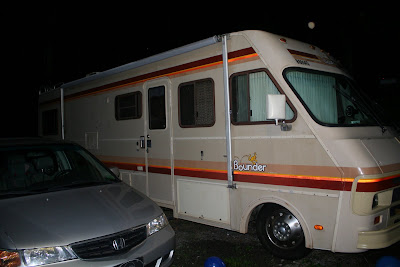 I promise that we do not allow alchoholic beverages at children's birthday parties.. 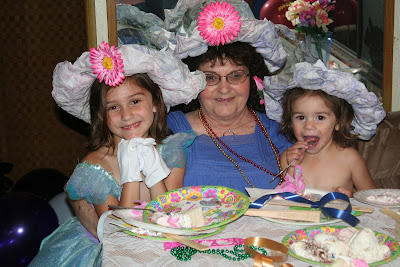 Besides, my mom and dad had finished up the last of the moonshine earlier that day. 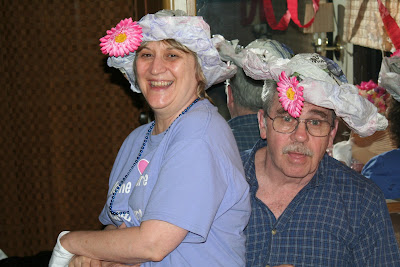 Emma must have inherited some class from the Ellis side of the family because that child did not deviate away from the English accent that she has perfected in anticipation of this great event.. 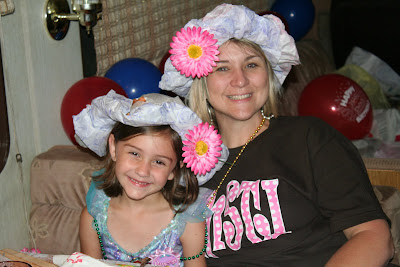 Somewhere, the crystal became paper plates. But if you look closely at the picture below, you will see that Emma did drink out of a very pretty pink crystal cup. 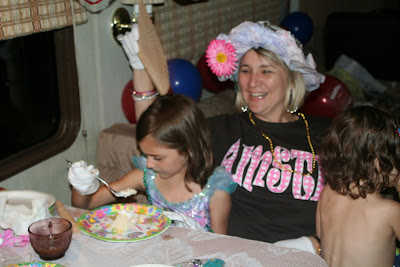 I know my dear Emma that you had imagined that you would have a tea party fit for a princess. And I promise my dear, next year, I'll make it up to you and splurge and have you a real nice party at McDonald's. 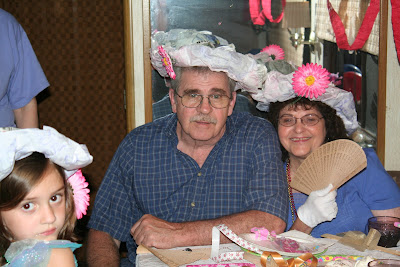 And I myself, sat and watched in horror and disbelief that I could have come from such uncivilized people. Because I myself am much too regal to ever participate in such shinanigans.. 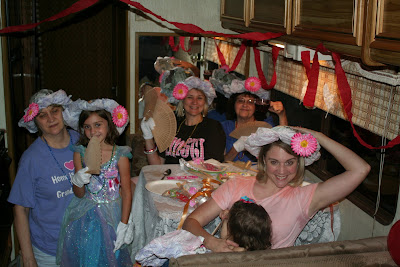 WHOOPS.. Who would have thought that my simple daddy could use my fancy camera???

PS: We visited many people that we love on our tour around Alabama. I have many more pictures to post including lots of pictures of cousins and friends and some of my beautiful niece and some shots of my handsome nephew doing his awesome wakeboard stunts and I hope to get those up soon.
Posted by Dana at 10:42 PM 11 comments: