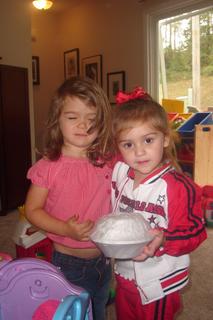 Picture: Emma and Anna at our play date

Before I start into my week, I will say that we went to the Zoe Conference with Brian and Angie Knost and had a great time. My mom drove to Nashville and got Emma (I have wonderful parents) and then my mom and dad brought her back to me Sunday.

Ok, now for the craziness....
Matt Wilson had flown to Nashville and road back to WV with us. If you know Matt, you know that he is 6ft7. This becomes important, I promise. Well, we stopped at Chuck E' Cheeses so Emma could have a break. (Thanks to Matt for being such a good sport). It was very crowded. There were like six birthday parties going on. Anyway, Adam and Matt were talking and I took Emma to play in the climbing tubes thing. I stood at the slide because that was the only way down. Well, she was up in the tubes for a while without me being able to see her so I began to get a little worried. I started to walk around trying to see in the windows and couldn't see her. I began to get very worried. I got Adam's attention and he came to the slide. I decided that the only thing for me to do was to climb up into the tubes. I got up in the tubes and couldn't find her. At this point, I organized about ten three and four year olds into a search party. We were all crawling through this maze of tubes looking for a little girl in pink and orange and yelling Emma. This picture seems somewhat amusing now but seriously, this was the most frightening moment of my life. By this time, I was in a full on panic. I was in a full panic and was in a maze. Not good... Since everyone had heard me yelling for my daughter, everyone began to look. I slid down the slide and began to look around. The first thing I thought was to check the bathrooms. So I ran screaming into the bathroom. Then the manager came out and began to very calmly and slowly ask me what Emma looked like. I wanted to hit the guy. I seriously was in the middle of a nervous break down and he was talking like a gay guy. Anyway, about that time Adam came around with Emma in his arms. Matt had spotted her climbing unto a skee ball machine. Thank you God for making Matt tall enough to see over everything in Chuck E Cheeses. Emma will not be getting in another one of those things until she’s twelve. I spent the rest of the trip trying to think of things to tell Matt to prove to him that I was in fact a good mother. But, I’m pretty sure that he’ll always see me as the crazy woman crawling through the tubes at Chuck E Cheeses screaming her head off.

Monday:
We tore down wallpaper at the youth house. We discovered at least five different wallpapers in the many many layers. Maybe more. It's still not finished.

Yesterday:
I left my cell phone on my car and drove off with it on there. Adam went to get it replaced for me only to find out that I had opted not to get insurance.

Today:
Well first, this is the second time I’ve written this post because my computer did something funky and I lost the whole thing.

Emma and I had a play date with my friend Julie and Emma’s friend Anna. Anna is about six months older than Emma. We had a wonderful time. Emma doesn’t usually have girls to play with. But, in the two hour period we were there, Emma pooped four times. And we’re potty training so it wasn’t a pretty picture. I know you may not want to hear about my child’s poop but when you become a mom, poop talk is a normal part of every day life.

Then church…
Our church works with a government subsidized apartment complex. I’m so proud to be apart of a church that does this sort of thing. The kids from this complex are bussed to church. What an awesome opportunity!! I will take a moment to brag on our teens here. Our teens are great. They along with Ryan and Jesse Ice (our interns) go to the Powell Apartment complex every Thursday night and sing songs and do crafts and stuff with these kids. If it weren’t for their hard work, these kids wouldn’t be at church.. Our teens are great!! But, these kids don’t exactly know how to act in church and I had eight of them. It was a crazy night. But, when we were leaving, this kid, Tyrell asked me “Do you want me to come back?” I said, “Well of course I do Tyrell”. He said, “Will you be my teacher?” And so I’m thanking God for giving me the honor of being one of the people that get to show this kid Jesus. And so I’ll pray, somewhat reluctantly, that next week, God will bring me twice as many.

After church:
Emma was taking a bath and the door bell rang. I ran to answer the door. It was a woman from church dropping something off. Then I heard Emma screaming in the bathroom. I ran in there to find that she had poured a bottle of shampoo on her head. I wet a washcloth and handed it to her. She stopped crying and I went back to the door. Emma started crying again. Becky kindly told me she’d let me tend to my child and I went back to the bathroom. Shampoo had gotten into her eyes. I got her out and washed her eyes the best I could. She stopped crying but flatly refused to get back into the bathtub so I could wash the shampoo out of her hair. I then cleared everything off the kitchen counter and told her we were going to do it like Nonna does it at her beauty shop and rinsed her hair in the sink.

But really, after losing her on Sunday, this all seems so small. I really doubt that anyone reads this novel but writing it was definitely therapeutic and certainly cheaper than a shrink.

Before I go, I do have to share with you a couple of…..

On the way to Nashville, Angie road with me and Adam road with Brian. Emma was sitting quietly in the back seat while Angie and I talked ninety to nothing. Emma piped up and said, “Excuse me”. It may have been one of those things where you had to be there but we lost it.

And, she can say the pledge but instead of justice for all, she has justice frog.

See you next Wed.

PS: I spent two hours writing this twice. You could at least leave a short comment
Posted by Dana at 9:56 PM 13 comments: