When words are not enough... 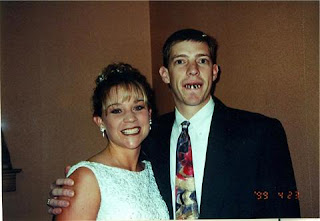 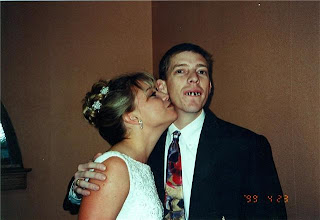 Tony and me at my wedding reception.  He greeted my guests as my "cousin Bubba"
Confession:  I want to be a hero.. I want to be the person that has all the right things to say at all the right times.. I want to be able to write my little post and it somehow be so amazing that everyone turns from it with a smile on their face to go on with their lives to live happily ever after...I want to write something that inspires people to live stronger and be better.   I have that post sitting in my drafts... It's title: "Someday I Hope You Get the Chance to Live Like You're Never Dying".. But we all know it's not that simple.  It's supposed to be a play on words.. I want to tell you what an inspiring life that Tony lived.  One where he never pitied himself.  One where he embraced each day like it was his last while all along never believing that day would ever come.  One that made doctors shake their heads in disbelief.  One that made everyone want to embrace the God that he loves that gave him a hope we could not understand.  A life that made parents hold their children tighter and husbands love their wives stronger.. I want to tell you about my Aunt and Uncle's strength.  A strength that helped Tony fight way longer than anyone thought possible.  A strength that enabled them to let go when it was time for Tony to move on to a new phase in life.  And a wisdom that allowed them to pull in or give him a push when needed.  I want to tell you about their love.. The kind that actually loves people into being better.. The kind that didn't result in just one child embracing life but three children that embraced life and embraced the kind of love that is so unreserved that it opens a person up to a pain that is almost too much to bear.  And, I want to tell you how they embraced three more children as their children found their loves... .  I want to tell you about the beautiful child that was given to he and his wife, through a series of unlikely events, too coincidental  to be coincidence.  I want to tell you about the way he loved that boy.  I want you to know that Tony was not special because of his disease.   He was special in spite of it.    And, while all of these things are completely and totally without a doubt true, they are anemic.  They only give you a glimpse of a picture that can not be described.  The problem with the human language is that I find myself trying to explain such abnormal, extraordinary things with such normal, ordinary words. 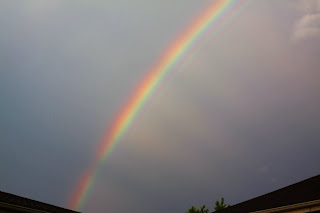 I walked out of the visitation on Wed. night
and saw this rainbow right over the funeral home and
made a mad dash for my camera.
Chloe said it was "Tony's rainbow".
PS: It had not been raining..
The truth about me is... I'm angry..  I could tell you what an awesome service it was and how it tied everything together with a neat little bow and how we all went away with a warm and fuzzy feeling in our hearts.  But that would be a lie.. And leave it up to me to say all the things we're not supposed to say.. The service: beautiful? yes. Honoring? absolutely!  Was God there? I have no doubt.. But, while I wanted to thank God for the beautiful life that Tony lived,  the selfish part of my heart was screaming, I hate this.  I am angry..  I know what you're thinking.. I'm the preacher's wife.  I should never have doubts.  Especially not about God.. And you know what?  That makes me even more angry.  And here's some news that shouldn't be new.  God already knows.. It's not like I could hide it from him anyway.. But just to make sure He knew, I told him.  I'm angry that my family is hurting and that there's nothing that I can do.  I am angry that we didn't get our miracle the way we wanted it.  That I had it all worked out in my mind, the people that needed their faith strengthened by seeing a miracle (myself included).  And as He so often does, God said to me, "Dana, I don't need your help".  And, that makes me angry again.. I'm angry because, though we all want to say that time heals all wounds, I know that it doesn't.  While time may teach us how to live with the wound, it will never completely heal it.  And I'm even angry at the suggestion that it should.. I'm angry at myself for being selfish.  For not just being okay with letting him go and being healed.  I'm angry that I'm scared.  That people will be right.  That everything will be okay.  Because I'm not okay with just okay.  I'm angry that faith has been confused with acceptance.  That faith has been portrayed as believing without ever doubting..  I'm angry that I know that this won't be the last time I feel this kind of pain.  Or worse, I'm afraid that I will give into my fears and guard my heart so that I will never have to feel it again.  And I'm sorry.  I'm sorry that this is left open.  Because I just can't bare to close it.

And just in case there's someone else out there that has those same fears.. Just in case there is someone else other than me that has had the ridiculously stupid thought that they'll try to keep themselves from everything that is good about life so that they can save themselves some pain, I'll share a quote that I found as I was desperately searching for words of comfort:

"Do you want me to tell you something really subversive? Love is everything it’s cracked up to be. That’s why people are so cynical about it. It really is worth fighting for, being brave for, risking everything for. And the trouble is, if you don’t risk anything, you risk even more."


And so here I am again, raw and open.. Because I can never keep up a show of being something  I am not.  I have no doubt that we will come out of this deep abyss even stronger..  That the prayers and support of those we love will pull us out.  And I know that through our screams we will continue to hear God whisper,  "I am here".  We will soon laugh about the good times and marvel at the miracles that came from Tony's story.    But, for now, the abyss is deep and it is dark and I am weak and only time can teach us a new way of living..  So please give us grace as we learn to make peace with our new pain.. 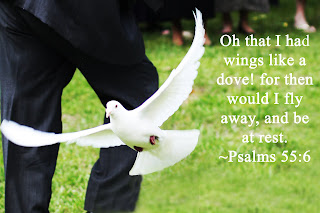 From the dove release at Tony's funeral.
It has to be the grace of God that allowed
me to catch this shot.  Once I was asked to do it,
I got so nervous and was shaking so badly at the thought
of only having one chance, I just knew that everything
would come out blurry.