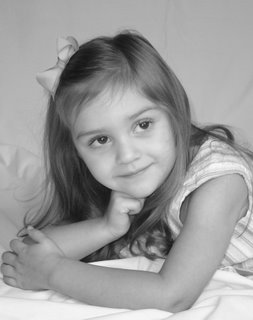 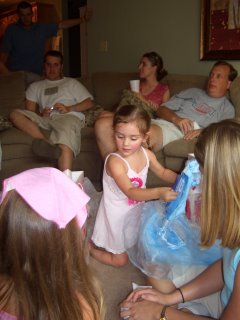 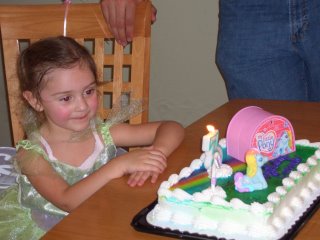 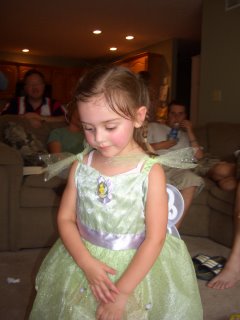 This post is a little late. It's the first I've gotten a chance to update you on our big girl (Emma is very adamant now that she's three that she is no longer a little girl). Her birthday was June 19th. For any of you youth ministers/wives out there. Summer is the worst time for a youth minister to have a baby. Poor thing, her birthday is always shared with some youth event. Since her birthday was the second day of work camp, we had her party on Saturday. Aunt Jan flew in on Friday and Adam rushed home from the air port on Saturday after picking up the work camp speaker just in time to grill some fabulous hamburgers for our guests. We had a nice little party. Also, my mom and sister had her a wonderful little party when she was down in Alabama visiting them weekend before last. We ended up celebrating her birthday for about two weeks. But here is what's on my mind...

I can't believe my baby is three. Wow, it's like it's the cut off between baby and child. It's working to my advantage.. She told me the other day that she helped her Sunday school teacher clean up because she has to be a good example for the two year olds. And, she also informed me that now that she's three, she will be obeying me because three year olds make good decisions. So like I said, there are good things about having a three year old. I'm hoping this new philosophy sticks but still, SHE'S THREE. That's a little sad. Don't get me wrong, it's nice that she can have these little conversations with me. I have so much fun just seeing what she comes up with next. This age is great! But, my baby is gone. People have told me over and over to soak it up because she will be grown before I know it. And, I will say this, I can't... As much as I soak, she's still growing too fast. So anyway, I just thought I'd get that out.

Ok, now to work camp. Work camp is this thing they do here where they go around the area, find people that need there houses painted and then 500 teenagers and adults come in from all over the US and they paint them in 4 days. Well, apparently being the work camp photographer is quite a task. They normally do a slide show at the banquet on Thursday night that has before, after, candid and group pictures in it. I figured that photographer meant taking pictures. Little did I know, that I was supposed to do the slide show (something my wonderful husband neglected to share with me at the beginning of all of this) So on Monday morning, I received before pictures of about 35 houses none which were labeled and a separate address list. Once I finally figured out the addresses to the houses, I had to go re-take about half of them because they were very poor quality taken from a phone camera. Emma spent her birthday riding around in the car with me while I jumped out and took pictures. Adam was able to go with us the first day though so it wasn't so bad since we were all able to be together. I know that riding around in the car all day isn't the best way for a child to spend her day but, it is teaching her that she's part of a bigger plan and that it isn't all about her. That is something that we'd all be better off if we learned at a young age. It rained a lot of the week and it put a lot of groups up to the very last minute finishing their house. I had gotten a hold of some people were out on the sites that were the furthest away and asked them to bring me their pictures. We were still getting pictures at 6:15 and the banquet started at 6:30 So anyway, we didn't get the slide show done quite in time. Thank God Jan was here or it wouldn't have gotten done at all. But, Kevin, the director did an excellent job stalling. I swear he had everyone in the room stand up for applause and some a second round of applause. It would have been funny if I hadn't been on the verge of a nervous break down. The power went out once too! Thank God for battery back ups! We finally got a very mediocre slide show up and going. On Friday, I went back and took some more final pictures and Jan helped me build the final slideshow which was pretty good if I do say so myself. That will be sent to all the churches that participated for them to show at home. The most important thing though is that some lives were touched and hopefully, those people were able to see Jesus in a very practical and tangible way. It's very hard during things like this to not get caught up in the work and forget the point (Showing Jesus to the world around us). None the less, Jason Steckel, if you happen to read this, The Mid Ohio Valley Workcamp missed you this year!! We need to talk to you before next year and figure out your system! Anyway, this week, is Emma's week. I will be making up for all the time she spent in the car last week.

Btw, if any of you that are reading this were at church last Sunday, I am aware that David got all over my last post. For those of you that weren't... He said that it took a community to raise a child and that we all got offended if someone told us how to raise our children. Ok, here's my disclosure: David is a wonderful guy and he's a great speaker. And, I agree with him...sort of. There is this old saying, "No one cares what you know until they how you care". That's true. There is a way that you go about "helping someone". Criticizing is not the way. And, you have to have a certain relationship with that person before you can even "help". So, I stand by my words. You can love someone and support someone into being a better mother. My mother does it to me all the time. A critical spirit never helps anyone but Satan.