Funny story with this one...

Emma came in the other day and said, "Mom, Friday is tacky day.  I don't have any tacky clothes so can I wear one of your shirts"?  OUCH... I got a good laugh and spent a few minutes trying to see me through her eyes.. I remember when my mom was in her 30s... She seemed so grown up to me..  Many days, I still feel like a kid trying to raise a kid.  I wonder if my mom felt as un-equipped to be raising children as I do some days...

Anyway, after stroking my bruised ego and a little further investigation, I learned that it was "80's tacky" day  and she had already done a little 80's research of her own.  And she was planning on taking the leggings and over-sized T-shirt route with a large belt.  Or at least that was her defense... 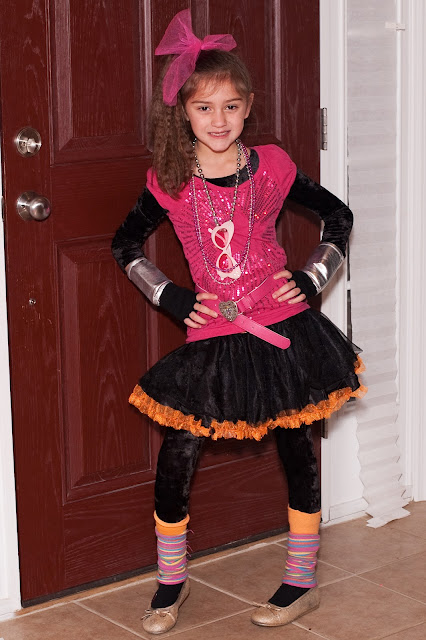 So, I started pulling up 80's pictures on the internet and Cindi Lauper videos.. And, we came up with an outfit that I think might have just won me some coolness points..

And if you too are feeling nostalgic, I've got a fun site for you to check out:  Like Totally 80s.  I laughed and laughed... I'm pretty sure we could have gone with any fad from the decade and totally covered the tacky part.  Banana clips, acid washed jeans, scrunchies, tied rolled pants, jelly bracelets, jelly shoes, reebok high tops, Michael jackson jacket...   I totally have the urge to put on some stirrup pants today!  I'm thinking 80's party for the grown ups.. Any takers?

**Edit** I've had some questions about where I found all the things that she's wearing so I thought I'd include that...

I didn't buy a thing specifically for this.  We did already have it all at the house.. I broke down and bought some stuff when we had 70's week but when this one came up, I decided that they were going to be having these things too often for me to buy an outfit every time it came up...

I get my resourcefulness from my mom who taught me how to pinch a penny until it screams..

*The black shirt and leggings are actually a unitard from dance. (We fully tested it to make sure it would come    down over her shoulders so she could got to the bathroom at school ;)

*The skirt came from me making an exception and going to Walmart  after Halloween because they had their costumes 90% off.. They didn't have anything good left.. But since I HATE Walmart, I didn't want the trip to be in vain so I grabbed a skirt for each of the girls and paid $1.30 for each.  She is wearing both to make it more poofy.

*The shoes are Dorothy shoes from their dress up box that I spray painted with some metallic paint that I had left over from a harp we made in children's church.

*The leg warmers are actually legs cut off of tights that are too small for Chloe.

* The bow in her hair is from the princess tulle skirts  that we made for her birthday..

* The things on her arms are from Chloe's Wonder Woman costume.

* Beads and sunglasses from the dress up box.

* The gloves came from a pack of two that I bought because I wanted pink gloves for Chloe and they only
came in a pack of two.  I just cut the fingers off.

*  And I'm a little embarrassed to admit it but the shirt and belt are from her regular wardrobe.. She likes the
sparkly..

* And believe it or not, I still had a crimping iron from when the girls we worked with in youth ministry had me
crimp their hair.

And, one day, they'll have a 90's day and I'll be totally prepared because I saved all of my teen magazines!