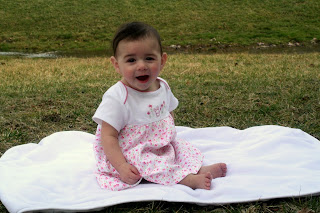 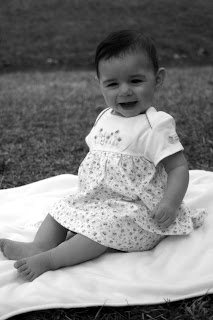 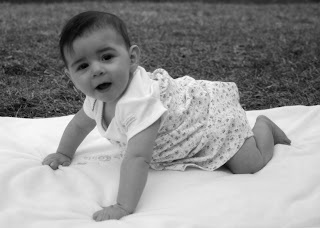 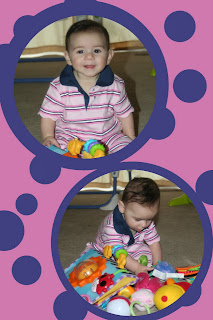 Since Chloe was born on the 30th, we didn't have an actual six month birthday. I guess that made her six months on the 1st. The only picture I got on the first was the one of her with Emma in her cast. These pictures where taken on the 2nd. That'll just have to be close enough.

She's rolling from front to back and back to front. She's getting up on her hands and knees and gets pretty frustrated when the only movement she can make is going backwards. She started babbling dada when Adam got to mom's on the 19th. That was a great way for Adam to be greeted. She has said both momma and emma a couple of times but daddy is definitely her favorite word. I've been trying to catch it on video so I can post it. She's sitting up and playing with toys and is just as busy as can be. The next six months is probably one of my favorite stages. I don't want to rush it but it's fun waiting to see what they're going to do next.

Oh my beautiful girls. Tell Emma that they both look just like me! (our little joke). Check your email, I have good news! Love Denise

do you use your camera on the manual setting or automatic?

These were done automatic with the portrait setting. I've been messing with the manual settings trying new stuff but still need practice!

I can't believe it's been six months! She's so cute!

I'm so jealous. Charlie is 10 months old and still hasn't said mama. He can say dada but it doesn't refer to my husband. It's just a sound he says. Also, I've got a slider instead of a crawler. He slides everywhere on his belly. Who knows if he'll ever use his knees! I read Adam's blog a few days ago about the dadada thing and my first thoughts were...no fair! :) I guess they all develop in their own time.

i can't wait to hear "mama"! she is sooooooooooo pretty!

Your girls are SO adorable. I love your song too, that was my favorite song when I was little =)
~Alexandra