I must admit, that when it comes to spending a fairly large amount of money on a trip, I am pretty particular about the planning. And after our disastrous trip to Disney World last year, I was on a mission to get two trips worth of fun out of one trip. So, I read everything that I could get my hands on to make our trip just a little bit more magical. And though there were a couple of glitches along the way, it was nothing compared to the trip last year. But, I will spare you and save the vomit stories for later. And instead, I will share the info that I learned in planning our trip so that maybe, I might spare someone a bit of work in research.


Things I'm glad we did:

Stayed on Disney Property:
We stayed at the All Star Music Resort. This time of year, the rooms are at a low rate of $69 dollars a night. I was a little concerned with my sheet snobbiness that I would be disappointed with the sleeping accommodations but I was pleasantly surprised to see that we had Sealy Posterpedic beds and the sheets weren't luxury but, sufficient. I did take my own sheets just in case but didn't end up using them. Staying on site also entitled us to the Extra Magic Hours. The parks rotate opening one hour early and staying open three hours late for only resort guests. I planned our days in the parks according the extra magic hours at night. We cleared out of the park during the middle of the day when the park was the busiest and went back to the hotel for naps so that we were well rested for the night time fun. And, flashing my card to show I had access to be in the park made me feel like a VIP :). Staying on property also entitles you to Disney's bus service that runs at least every 30 minutes and drops you right off at the park's gate. So much better than trying to find our own way around, wasting our gas and time trying to find a parking space. 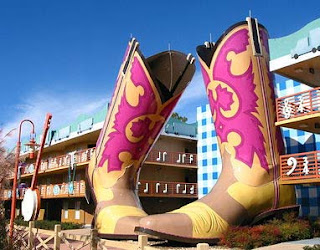 Requested a connecting room to my parent's room:
This was so helpful because the girls could run back and forth to their hearts content. Much better than having to go outside to run back and forth. IMPORTANT! THERE IS A DIFFERENCE BETWEEN ADJOINING ROOMS AND CONNECTING ROOMS. ADJOINING JUST MEANS THAT THEY ARE SIDE BY SIDE. CONNECTING MEANS THAT THERE IS A DOOR BETWEEN THEM ON THE INSIDE. If you want that feature, I would recommend calling and talking to someone on the phone and making sure they know you want to be able to go back and forth without going outside. I also requested rooms far away from the lobby. This gave us quite a walk to catch the bus but the closer buildings are also closer to the pool where there is a lot of noise and I wanted to insure the ability to get a good nap.


Used the Disney Meal plan:
I'll say up front that I think if you worked really hard at it and did some of your own food, you could come out cheaper. But for us, the meal plan was the way to go. We ate like royalty and for me, one of the most stressful things about vacation is feeling like things are adding up as we go along. The meal plan is 39.99 per night per person a day and it includes 1. Table Service meal 1. Quick Service meal and 1. Snack per day. Our meal at Cinderella's Royal Table was 253 dollars for five adults and one child (chloe was free). I would have had a heart attack if I hadn't known it was already taken care of. A quick service meal for four adults one night was $84 (the kids shared). Since the character meals were such a big part of our experience, I wouldn't change the decision to go with the meal plan. Though we paid more up front, we spent less than $150 on the whole trip, gas and meals on the way included. If you count the energy we saved not being at home, that will come in under budget for the week. And, I wasn't scared to look at my checking account total when we got back home. If you are really interested in the bottom line figures, here is a great post on the Breakdown of the Disney World Dining Plan

Took advantage of the fast passes:
For further information, read about the Disney World Fast Passes. The site I just linked you to explains it real well so why do it double time.  So let me summarize by saying, you'll want them, you'll use them, you won't regret it.

Scheduling of the Royal Table Dinner:
This happened completely by accident but the only reservation left for Cinderella's Royal Table was a very late one at 7:45 p.m. Since, the ending ceremony and fireworks were at 8:00 p.m., this gave us window seats to the fireworks as well as the dinner show with the fairy godmother and the mice. NOTE: Cinderella's Royal Table dinner includes a photo session with Cinderella and a show with the fairy god mother. It does not include dinner with all the princesses as the breakfast and lunch does. You will also read about this in my hindsight's twenty twenty section. 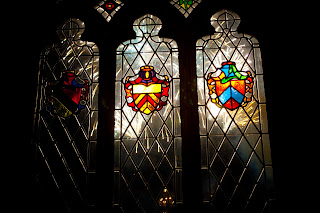 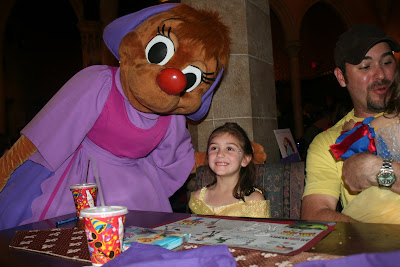 Made reservations for the character meals:
This is a great way to get to see the characters without having to wait in line. This time, we ate at Cinderella's Royal Table, Hollywood and Vine and Chef Mickey's. I had been told that Chef Mickey's was the best character experience and it didn't disappoint. All of the classic characters were there except for Daisy Duck. These dinners book out quick so make your reservations early. To make sure you don't miss the opportunity to see your family's favorites, I'm linking you up to a listing that tells where each character can be frequently found. Disney Character Appearances 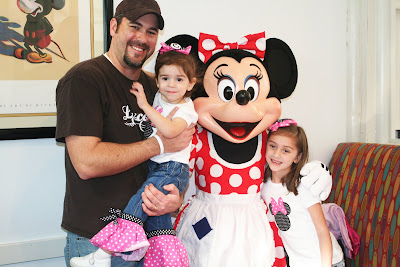 Made friends with the Disney World employees:
Chloe's favorite princess is Snow White. Since Snow White wasn't on the schedule of character greetings, I was on a mission to find Snow White after a show or parade or something so Chloe could have her picture made with her and Emma could get her to sign her autograph book. We asked an employee where we could find Snow White. He sent us to the City Hall at the front of the park. When we got in the City Hall, they made a phone call. A few minutes later, Snow White met us in the flower garden next to City Hall for our own little meet and greet.

Making friends with the Disney World employees also earned us a spot as the "First Family In" in the "Play House Disney" show. Certificate and front row seats to boot. It's also the thing that covered my ignorance on the connecting/adjoining room issue. The guy at the desk nicely switched things around for me without a problem. In Short, the Disney staff is awesome and it can't hurt to ask.


Since this post has gotten quite lengthy and I'm severely lacking in sleep, I will come back with a Part 2-- Things I'm glad we took soon.

And may your night be magical and may your prince always kiss you goodnight.

Dana
Posted by Dana at 8:51 AM 4 comments: Links to this post