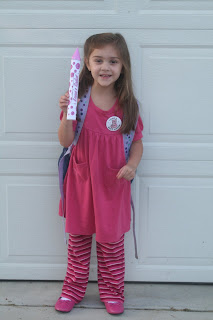 Well, in the middle of everything else that was going on, Emma had her first day of preschool. We attended her class picnic the day before Chloe was born and then Adam broke away Thursday night (the night she was born) to go to her class meeting. Chloe was born on Thursday, Emma started school on Tuesday. This year wasn't quite the adjustment for me that last year was. She will be going every day but from only 9 until 11:30 and she just loves it. So far it's worked out really well. It's just enough time for her to be out of the house so that she doesn't get bored but, not so long that she feels like she's missing out on anything. I'm thinking that that will end up being Chloe's nap time so it should give me some time to get some things done around the house.

Back to the first day of preschool... At the parent meeting, they were given a kit to make a rocket. On the first day of school, they launched their rockets (I don't know how, something to do with alkaseltzer). You can see Emma's rocket in the picture. Adam helped her make it. Her teacher said that hers was definitely the best one and that she was so proud of it.

I was talking to her teacher yesterday and she told me of a little interaction that happened at preschool that I thought I would share with you. There is a little girl that is in Emma's class that has never been away from her mother so she's been having a hard time with it and crying everyday. Well, Mrs. Maidens was talking to the little girl and trying to comfort her (she's such a good teacher). And the little girl said, "I just want my mommy". So, Mrs. Maidens said to her, "Your mommy is coming back to get you. Sometimes we just have to be patient when we don't get things right when we want them" Emma comes up and says, "Yeah, like I want it to be Christmas tomorrow but it's not". LOL.

Then today, we were going to Toys R' Us so I could get this little swaddler thing. Chloe sleeps much better when she's swaddled but I'm paranoid that it will get up around her face. Well, this thing is supposed to prevent that. I'll let you know if it works. Anyway, I told Emma we were going to Toys R' Us and she says, "Can we go to Borders". Yep, she's a nerd, just like her daddy.

And a very sweet moment... We were riding in the car and she said, "Do you remember when daddy got the flavoring to put in my medicine because I didn't like the taste of it?" I said, "Yes I do". She said, "That daddy is always doing sweet things like that for me". :).

Anyway, Emma seems to be doing good. There have been a couple of signs of adjustment. She's been very emotional. I think that probably has more to do with my parents leaving than Chloe coming. But, all and all, we're working out the kinks and trying to develop a routine. The church brought us two meals and my mom's club has brought us several meals. I'm getting spoiled. It has been so nice. I love those girls. 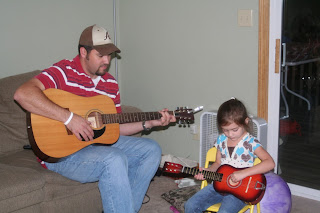 Emma and daddy play their guitars
Posted by Dana at 9:38 AM 2 comments: Links to this post