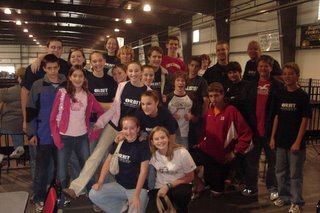 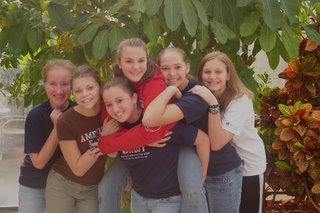 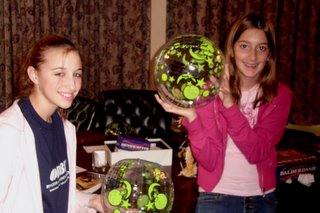 The Retreat was great! The Theme was Orbit: Revolve Around the Son. Adam did three great, thought prevoking lessons. Everyone got along great (as always). This group does a great job of loving each other. The hotel had a really neat set up with an indoor pool and a hot tub. It looked like a jungle when you walked in. We enjoyed that tremendously. I learned a new game.. Animal Ball. This game is played in the pool and can get quite violent. We were having a great game of very involved Animal ball, when other people, not with our group got in the pool. The teens did not even hesitate when I told them we needed to quit since there were other people in there. They did a good job putting in to practice the things that Adam talked about in his lessons about not thinking the world revolved around us. Like I've said so many times before.. They are a great group and I'm very proud of them.

Lindsey and I found an awesome deal on blue jeans at the mall. They were marked down from $75.00 90% off and then an additional 15% off that. They ended up being like $6.00. We were extremely excited about our awesome fashion deals.

We ended the trip with a trip to a place with indoor go carts and laser tag. We had a girls against guys game of laser tag and the guys beat the mess out of us. I think that Scallywag Tag in Cincinnati spoiled us because no one was that impressed with their laser tag facilities. The go carts however, were a different story. We had a lot of fun racing each other. And, though we tried very hard, we had a little contact where we wasn't suppose to.

Almost everyone in the youth group went. It was a great turn out and tons of fun. Thank you Angie Knost for being a chaperone and thank you Ryan and Jessie Ice for all your hard work!! We love you guys so much!!

Now, let me describe the pictures.

1) This is a picture of most of the people that went. Sorry if you aren't in it. I forgot to get an "official" group picture. I snapped this one while Adam was buying tickets.

2) Picture of some of the girls in the jungle pool room.

3) Jenna and Kylee signing warm fuzzies on our galaxy beach balls.
Posted by Dana at 9:52 AM

I love the pics and the post about the retreat! (We don't get a lot of info from Kylee) It's really weird not being there! I'm glad you all had a great time.